So now I will have to talk about the one thing I was planning on keeping a deep, dark secret:
My birthday. Ok, I’ll just come out and say it. My 30th birthday. There. It’s said. Now let’s move on quickly beyond the number, and towards the strange and scary tradition that comes with celebrating a cumpleaños here in Ecuador…

The first time I became aware of the morbid and cruel practice that is an Ecuadorian birthday, was about a month ago. It was the day my colleague Andres turned 22. We had a lovely celebration for him at our soccer school. It all started out so sweet. We’d gotten him a cute little pie, and all the children broke out in an enthusiastic cumpleaños feliz as we brought it out. Anybody watching the adorable video on the Local Dreamers Facebook page, would think it the perfect birthday. Little would they suspect, that things took a dark turn after that.

It all happened at the hamburger joint, where we often go for a quick bite after the soccer school. While we were all happily stuffing our faces with freshly barbecued burgers and cold cervezas, one of my colleagues suddenly commented that we shouldn’t forget to spank Andres after dinner. I burst out laughing,  assuming it the best joke of the evening. But he wasn’t kidding. And Andres quickly turned a disturbing shade of white.

As it turns out, in Ecuador it isn’t considered vicious nor weird to smack a birthday boy (or girl) on the butt on their big day. Supposedly, it is considered good luck to get hit by your buddies 22 times on your 22nd birthday. So, instead of blowing out 22 candles like a normal person, Andres got to bend over the table to let our Local Dreamers volunteers take turns flogging him with a belt. Happy birthday to you, dear friend!

Now, I don’t mind hitting my colleagues from time to time when it is called for. Having them hit me on the other hand, isn’t particularly high on my bucket list. With my own birthday just around the corner, I therefore started planning my escape immediately. Luckily, one of the volunteers just happened to turn 21 a week before me. And for some reason, he was all but too eager to undergo the full Ecua-birthday-bash experience.

With the sadistic urges of my fellow do-gooders so recently satisfied, I actually got away with simply forbidding everyone to so much as look at my tush when my day came around. Of course I did get my head pushed into my pie so far that I was still blowing whipped cream out of my nose two days later. But that’s a small price to pay, in return for the ability to sit. And I do dearly love to sit. Not to mention NOT getting hit. 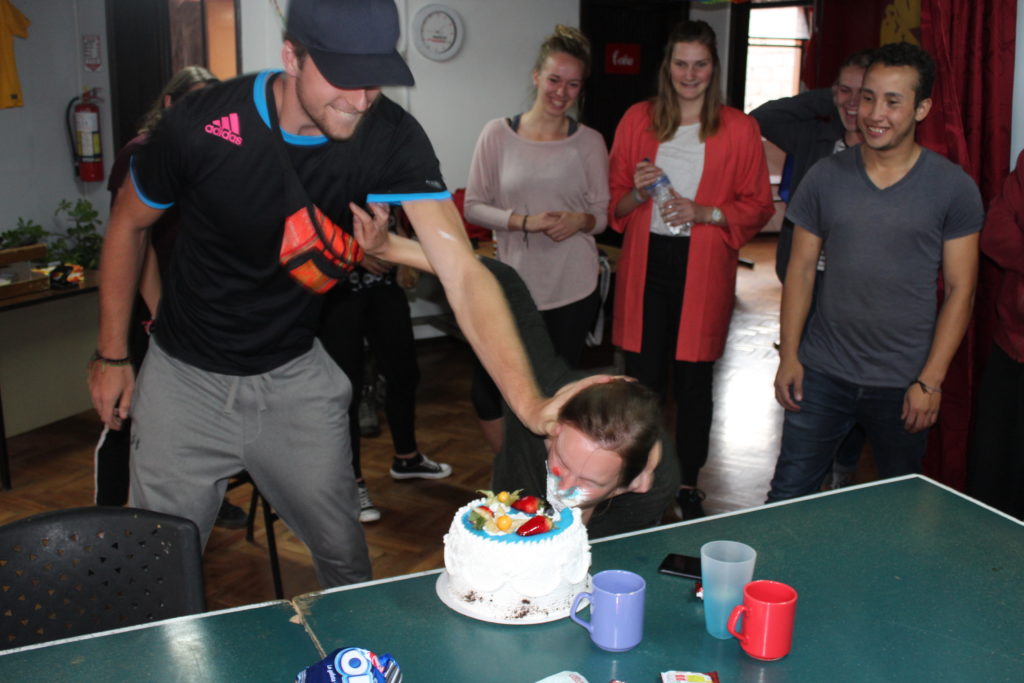